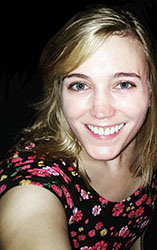 Caitlyn Thompson is a linguist, writer, and lecturer at San Diego State University. She received an M.F.A. in creative writing from San Diego State University, an M.A. in linguistics with a specialization in endangered language documentation and conservation from the University of Hawai’i at Mānoa, and a B.A. in literature with minors in German studies and linguistics from the University of California at Santa Barbara. Her research interests include documenting and revitalizing endangered Native American languages, as well as working with populations whose languages are endangered in order to help them achieve their goals for their languages and communities. Her teaching interests include rhetoric and writing, literature, Native American history, Native American languages, and endangered languages. She is currently working on documenting various endangered Kumeyaay languages.