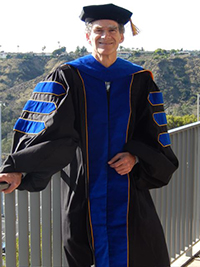 Glen McClish (Ph.D., Rhetoric from University of California, Berkeley), who arrived at San Diego State in 1999, is currently Chair of the Department of Rhetoric and Writing Studies.  He has published articles and reviews in The New North Star, Rhetoric Society Quarterly, Advances in the History of Rhetoric, College English, The Journal of Communication and Religion, The Journal of Teaching Writing, Rhetorica, Rhetoric Review, Quarterly Journal of Speech, Rhetoric and Public Affairs, Composition Studies, and Communication Education. In addition, he has edited a composition textbook and several instructors’ manuals. His scholarly interests include eighteenth- and nineteenth-century British and American rhetoric (with a particular emphasis on African American discourse), as well as composition and communication pedagogy.  He has served as the Interim Dean of the College of Arts and Letters, President of the California State University English Council and the American Society for the History of Rhetoric, Chair of the CSU English Placement Test Development Committee, and has been a member of the Board of Directors of the Rhetoric Society of America.  Since 2000, he has worked with local school districts and community colleges to improve college readiness.  As a part of this effort, he is currently on the Steering Committee of the CSU Expository Reading and Writing Course.  He has served as the Vice-Chair of the SDSU Senate and as Chair of the Committee on Committees.  In addition, he has served as a Member at Large of the Senate Executive Committee and as a member of task forces dedicated to serving commuting students, improving recruitment and retention of underrepresented students, improving course evaluations, and examining class size.  He is currently ​Corresponding Secretary of SDSU’s Phi Beta Kappa Chapter (Nu of California).

“Strong Understanding and Immoderate Feelings: A Case for the Influence of Hugh Blair’s Concept of Taste on Jane Austen’s Sense and Sensibility.”  Advances in the History of Rhetoric 18.1 (2015): 69–96.