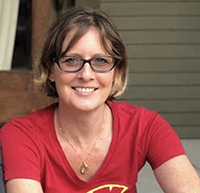 Jennifer Sager earned a BFA in Drama/Acting at USC and an MA in English/American Literature at SDSU.  She has been teaching in the department for twenty years, having started as a tutor, then a TA, and became a lecturer in 2001. Lecturer Sager incorporates different kinds of rhetorical analysis and writing studies into her classes, including academic, civic, personal, and professional writing. Her background is in theater, film, television, and literature.