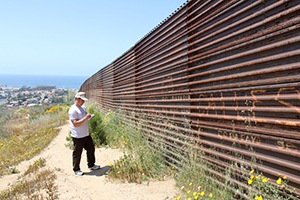 Kimball Taylor is the author of The Coyote's Bicycle: The Untold Story of Seven Thousand Bicycles and the Rise of a Borderland Empire, which was a finalist for the California Book Award. A longtime contributor to Surfer Magazine, his work has also appeared in the Los Angeles Times, Vice Media, and The Atlantic.

Taylor received his MFA in Creative Writing at SDSU and has lectured in Rhetoric and Writing Studies at SDSU since 2016. He strives to employ his experience as a journalist and author to aid students of rhetoric and writing in analyzing and understanding the arguments of other rhetors, producing their own texts, and entering the conversations of their chosen fields of study.