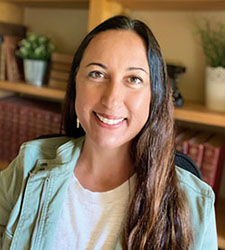 Nolana Nerhan earned a B.A in Psychology from The University of Arizona and an M.A. in English and Comparative Literature from San Diego State University, with a research focus on Indian and Iranian Literature. She has been teaching in the Department of Rhetoric and Writing Studies at SDSU since 2005. Nolana particularly enjoys teaching texts written in times of revolution or civil unrest from writers around the world and in various historical eras. Her approach to teaching is student centered, and she often encourages students to choose texts and topics that are important to them.

Outside of teaching, Nolana enjoys being in nature, traveling, and spending time with her husband, daughter, dog, and cat.