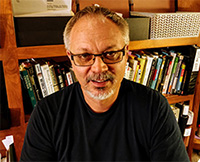 Chris Werry (Ph.D., Rhetoric, Carnegie Mellon University) is an Associate Professor whose teaching and research interests include: rhetoric of inquiry, argument, theories of language, composition, new media, and online education. He has worked on large electronic text projects within the academy and in industry, and is interested in how the resources and knowledges produced by different communities get organized in online environments. He has published articles on the rhetoric of electronic commerce, and on the pragmatics of online discourse. He is co-editor (with Miranda Mowbray) of Online Communities: Commerce, Community Action, and the Virtual University (Prentice Hall, 2001).

He is currently working on a book that examines the rhetoric of Chomskyan and cognitive theories of language. The Rhetoric of Contemporary Linguistics: A Rhetorical Analysis of Chomskyan and Cognitive Linguistics focuses on the key rhetorical imperatives that have shaped these two areas of inquiry, and investigates the strategies of argument that have been central to the fashioning of grammatical theory as a distinct and relatively unified area of inquiry. Drawing on work in the rhetoric of inquiry, rhetorical theory, and the study of disciplinarity, the book examines the major tropes, rhetorical strategies and narrative forms that both characterize and enable knowledge production within Chomskyan and cognitive linguistics. The book considers what a more reflexive, rhetorically self-conscious linguistics might look like, how this might reorient certain aspects of linguistic inquiry, and have significant implications for rhetorical studies.